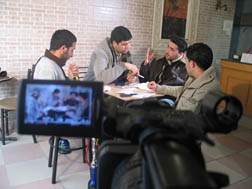 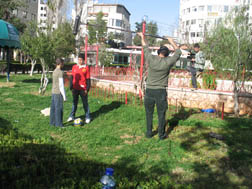 The object of the project Peace Education through Modern Media was to equip Palestinian youth with tools to deal with conflict non-violently.

From all over the West Bank with a special focus on remote areas with little involvement in past projects 80 participants, 20 of which were teenagers, 20 university students, 20 teachers and conflict resolution trainers and 20 media experts, were selected. After holding three four-day workshops on methods of conflict transformation, 10 selected participants partook on a fifth workshop on scriptwriting. These participants were involved in the scriptwriting of six short drama films on topics identified as most relevant in the preceding workshops. The films were aired on the Maan Network and made available to schools, universities, NGOs and other educational institutions. On a ceremony of official ending of the program they were publically screened for the first time.